Scenes from the City Part 3: The Recruit

More fiction for the lot of you! New narrator again, back inside the wall this time. Enjoy!

“And here, son, is where we make our nightly stand in the vicious defense of civilization against the terrible forces that would grind it into the dirt for their own sick amusement… Toli, Sim, a happy morning, this is the new lad… well introduce yourself boy! That’s the way… anyhow, along to your left you’ll see one of the little watch points, Flares we call ’em, because if their lit they light up the big old mirrors… so eh, you see a growling huge light in the sky then you lug your bugs that way and trouble’ll find you soon enough! Eh! Ah, don’t looks so worried. The damn carpies might get onto the wall, yeh, but with steel in hand and your mates at your back then what’s to worry?” The instructor chuckled, and drove the stem of a pipe into his walnut face. The smoke he spat between words smelled strange.

“The damn girlies come up here in wooden armour, barely a sharp stick to aim ’em. What they going to do, wrestle us until they get tired. Mad, every bloody one of ’em… you’d think they’d learn after – Neg, good to see you. After the first few dozen et lead shot on the ascent. Keep coming though… powder stock here, you can duck back here for more shot, just don’t be a bloody turkey and try doing it when carpies are up here and swinging at you eh?That’s what your blade’s for.”

He leaned over the cache of powder bags in their tarry shelter and spat yellow phlegm over the Wall, through the snatching winds and onto the mountain of scree that set up against the heavy blocks at the base. The instructor winked.

“One more thing for ’em to slip on eh? Anyway, Graf says you know your powder drill, and you can spear the bag just fine…” he seemed to think for a moment, the weed he tapped from his pipe wafting inelegantly over the powder cache. I didn’t have a moment to jump away, to even hurl myself back off the rampart. I must have twitched, because the instructor blinked at me slowly, before shrugging.

“Yeh, it gets pretty breezy up here, don’t it? Not like living down in the streets, no shelter. You’ll get used to it, then you’ll wonder how you ever got by in some of the Rose Lane Houses, eh?” He laughed again, and slapped my shoulder. “There’s a little scrap room down this way, careful on the stairs, come on… I’ll pull you a mug, get that chill out of you… then we can get you into the ledger so you can start raking in your Rooks, yeh? There’s a good lad. The guard’s a good place for a young chap like yourself, no more muck hauling down in the alleys, oh no; real blood and glory we get up here, with whole nests in your purse to match. We’re glad to have you, that we are, just think of how the good folk’ll gaze at you when they see that you’re one of their valiant defenders…”

We reached the bottom of the rickenback stairway and he began to fumble with the catch of a little wall-leaning shanty, one like a dozen or more I could see in the smoky alley of wood and scavenged stone.

“There we are, takes a bit of a wiggle somtimes… for all the harlots, they might leave the light by the door-”

“Put the damned light down, Gams.” It was a scratchy female voice from the dark within the hut. The instructor twitchedf involuntarily before puffing himself up and striding purposefully into the shadows, clattering amongst the detritus of a bench in search of the lamp lighter.

“How many times, Soma, must I tell you not to sit down here in the blood dinge? We need a light in here!”

“Go ram a consumptive milkmaid Gams, you know I don’t do day shift.”

“Because I was ordered here by the scum-ridden Major, who has yet to make his appearance so shut the accursed door!”

The voice felt as angry as a pan of spitting oil, and far more dangerous. I slowly closed the door behind me, my eyes growing slowly used to the gloom.

“The new boy. Where are the ramming wicks woman?”

“Burned out, and that’s where its staying.”

“In case you have forgotten, Corporal, I outrank you, so if say… ha! If I say that this wick is lighting then it will be so! Can’t sign the boy on in the dripping dark now can I…”

There was a brief striking of flint, then the lantern flickered into life. The glow crawled over the scrap room, slowly bringing into focus the figure who had been sitting on a desk by the wall, her legs crossed. A low growl surfaced in her chest  as the light scrambled between the twisting claws scratched in ink across her taut, blue-white cheeks, reaching eyes in red centred on wide dark pits.

“More meat for the market.” she snarled, her gaze drilling into me, her tattoos seeming to crawl in the lamplight. “What the hell are you doing here?”

I stammered a few brief syllables as the instructor put two pages on the table before me, urging that I make my mark on each.

“I…” I scrambled for purchase on my words in the oily firelight, “I need work. And there’s always a need for fighters, keep the… keep the barbarians off the Wall.”

“Just one more mark lad,” The instructor said, eyeing the tattooed woman who glared right back, “And you’re one of us, ready to walk out of here head high and rooks in hand…”

The woman he had called Soma snorted and rose to her feet, the uniform draped around her skeletal form looking filthy and askew.

“You sure you’ve been told everything boy?”

“I was first in my cadre when we went through drills ma’am.”

She chuckled, and her hair shone like oil in the light. I saw that her teeth were filed to points.

“Good,” she whispered in my ear as she glided past me, “So next time I see something that has no right to be anywhere on this earth or below it, I’ll know who to run to. Those Outsiders are clever, witch-ken and all. Glad you know all their little… tricks and secrets already…” she was silhouetted in the open doorway for a moment, “I’ll be outside.”

It was only when the door slammed shut that my brain began to register that the boards hadn’t creaked under her boots.

“Good to see boy!” Instructor Gams bellowed, slapping me on the shoulder again, “Now you take these and go rest up. You’ll be up here mostly nights, well… almost always nights, because that’s wen the trouble is ain’t it? But I’ll see you tomorrow just before sundown, and we can get you started on our good work…”

He was making for the door as I turned to speak to him.

“Instructor,” I near whispered, “Why do the barbarians attack the Wall?” 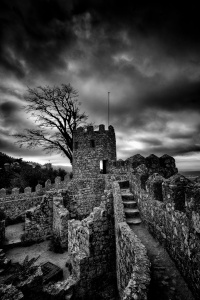 Photo “Sintra-16”, courtesy of Subodh Bharati  on Flickr, presented unaltered and with no money changing hands. Have a good one, y’all!

3 thoughts on “Scenes from the City Part 3: The Recruit”