Another episode from the City as it teeters on the precipice of the end of the world… another narrator, once again. If you haven’t read the previous installments, follow these linkies: Part 1, Part 2 and Part 3.

Indila had me again.

In a sudden and merciless sweep, her war elephants smashed through my scouts and chariots, edging my general off the battlefield. I sighed as my army collapsed into empty sigils, and Indila made to return them to their box. I refilled our wine glasses.

“Run me off again, cousin. There’s not a merciful bone in your body.”

“The problem, as I see it,” my waifish relative replied, rolling my general over in her fingers before entombing him in the box, “Is we just know each other too well, my dear Corrie. You might have grown into a responsible lady on the outside, but your still the reckless little girl I grew up with.”

I gasped, covering my mouth in a clown’s gesture of shock.

“And you, my love, are still the little liar who claimed it was me kissing stable-boys under the silos.”

“The very nerve!” I grinned back, fanning myself furiously, “You’ve had just as much to drink as I have. Besides, you never lose, sober or not.”

“Your too good for either of us. I don’t know… I don’t think you could close in for the kill even if you had the chance…”

There was a brief silence. Indila leaned back in her chair, drawing in the crisp air of the high chamber. She looked over her shoulder, out the window, at the moon as it hung over the inky black pit of the ocean.

“Not a hint of spite in you… even if you caught me in a lie you’d stick to it, let me get away with anything. Like when we stole that wine from your father’s cellar and went swimming in the lake. Even when Lyla got hold of you… well, you left me naked and alone in the woods. And I had to lie to Nursie about how I came to be nude and dripping at her door with bleeding feet. But she was nice.  And at least I didn’t get whipped…” She turned her gaze into her glass.

“I miss swimming. I miss when swimming was safe.”

There was another moment of silence, the wind whispering between the curtains that partitioned the room. My eyes remained on the sea, stretching out beyond the lights of the City below us. It was a cold night.

“We’ve been lucky. We held on to more than most.”

“That might be true. Doesn’t mean we saved all we could though… I mean, why couldn’t we keep the lake? It was just one lake…”

We both rose in silence and walked together, through the archway and onto the balcony.

“I thought I was the liar.”

I smiled gently in the moonlight, and she squeezed my hand as I gripped the bannister.

“Corrie?” The voice echoed up from the entrance hall, and even baffled by the curtains I recognized my husband.

“I’m up here my love!” I called back, and I could almost hear his soft step as he made his slow ascent. Indila smiled into her glass as I left her on the balcony.

Marcus gave me a smile as he ascended the last few stairs, placing the brandy bottle on the sideboard and almost slumping into my arms.

I took his face between my hands.

“You’re not that old, Marcus.”

“No… it’s just…” he trailed off, glancing over my shoulder. He forced his smile wider like a workman hefting a barrel. “Indila, how lovely to see you. I didn’t realise you’d be visiting tonight.”

My cousin leaned against the pillar, gesturing with her half empty glass.

“Well, your children have cleared off to your brother’s, and the serving staff are apparently healthier when they have some sleep… someone had to keep your little bride company didn’t they?”

My husband chuckled, and Indila stepped up, taking his hand and kissing the wrinkles on his temple that hadn’t been there when we married.

“I’m glad that it was you that came. I’d hate to think how much trouble she’d have gotten into otherwise.”

“I won’t tell you about the trouble I started then…” she looked past him at the brandy bottle, and smiled at me.

“Well, I appear to have appropriately diminished the wine stocks, I might leave you two lovebirds to your own devices…” she swanned off towards the door, “I trust the guest room is made up?”

“I like that… means I’m not out of wine after all.” She waved cheerfully, and began to descend the stairs.

My husband turned to me after Indila’s footsteps had faded.

“How does she keep smiling… how can she sit and joke while everything’s falling apart?”

I wrapped my arms around his waist, letting his forehead rest against mine.

“Marcus, not everything’s falling apart. The world changes, it has changed, and we’re still here…”

“It’s alright… we’re not going to fall apart. Are we?”

He didn’t answer, so I got hold of his greying hair and looked him in the eye.

“No. Of course we’re not.” he leaned back to wipe his eyes, “Its just… I’m not cut out for this, little bee. I don’t know why they decided to make me the judge, because I can’t bring them the results they want…”

I took him by the hand, and we slipped between the curtains and sat down on the edge of the bed.

“These… I don’t even know what to call them. Like ghosts slipping out to murder people… these murderers have haunted three of the noble families. Killed in their sleep, eleven now… they’re in my dreams Corrie, I can’t get them out!”

I held his head to my shoulder, felt his shoulders shake with exhausted sobs. 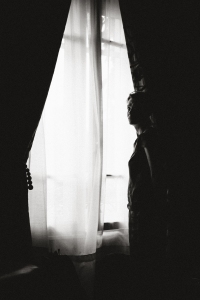 Photo “Waking Up In Auxerre”, courtesy of Benedeicto de Jesus on Flickr. To confirm, no; I am not making any money out of this blog. You are free to give me money if you want to, imaginary readers; but only if you really feel you have to.

2 thoughts on “Scenes from the City Part 4: The Highborn”