I currently have broccoli and garlic in a pot.

It will shortly be joined by pasta. That’s what I’m having for dinner.

Now, this isn’t another rant about my being poor. Its got a bit more to do with how sometimes really simple things are perfect, and for all that could be added to them, it won’t really be improved.

This was originally one of my partner’s recipes, and I suppose its that which connects it in my mind to a particular character in an anime that she watched almost religiously for a time.

For those of you who have watched Rurouni Kenshin, I’m referring to Saito. For those who have not, the Rurouni Kenshin series follows Kenshin, a warrior in the early years of the Meiji Restoration after he has sworn never to kill again. It toys with ideas around the end of an armed society, corruption blooming in times of rapid change, and the obsolescence of revolutionaries once all the fighting is done.

Saito, a later arc foil of Kenshin, is a nasty piece of work. Though he shows a degree of adaptation lacking in the serial’s previous villains, his obsession with violence takes on a more insidious quality. Rather than a warrior stuck in the past, he simply redirects his violent streak into acts of highly creative police brutality and ritualised duels in the name of martial virtue; and naturally this being shonen anime he has to battle the hero to prove he’s mightiest no matter how nonsensical that may appear to outsiders. He’s something of an echo of the Japan that would be; the ferocious Empire that tore forth into the twentieth century.

But what always struck me was that he would always eat his noodles unseasoned. I think I’m beginning to understand why.

My sense of taste has deteriorated further. What little is left is beginning to give vague hints as to what food contains that is of value. And I find myself drawn further to only lightly seasoned goods, be it soba and sesame seeds, salted baked potato or pasta and broccoli. Maybe I’m just digging the carbohydrate hit. Its lighter than anything deep fried.

But anyway. You put your finely dismantled broccoli in a pot with a touch of oil and a thin layer of water, so that it steams rather than fries. The garlic, crushed and chopped, dives in with it. Cook your pasta in salt water, drain i and mix the two when their ready.

Its a simple little thing. 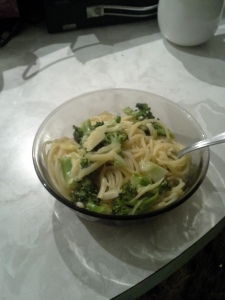