It was a thought that startled a friend of ours when we stayed with her in the UK.

I said that I had never seen a fox alive. I know they’re a massive pest here in Australia, but the only time that I had ever seen one before this point was as a mangled shape on the side of the highway. Usually the Hume Highway, between Sydney and Canberra. I don’t know if that’s significant.

So our host put out some chicken offcuts in her backyard, leaving a low light on and keeping a firm hand on her little West Highlands Terrier. Soon enough, to the Westy’s unhappy growls, we watched through the glass door as a trio of foxes, barely more than pups, hopped over the rear shed and dropped into the back yard. They warily snatched up the chicken before departing again, and I couldn’t help but feel like these strange animals were more like possums than dogs, leaping and clambering over fences and knocking over bins. Maybe I’m just more used to having possums near the house. For any imaginary readers who haven’t been to Australia or New Zealand, consider it a mercy to have not heard a possum’s voice at night. Scary shite right there.

Anyway, I was talking about foxes. I had met them in another context, in which they were neither flesh and blood creatures or flesh and blood road markers. Fox Shrines dot Japan, often in wild and partially forgotten places, or clinging quietly to unseen corners in the grounds of larger shrine complexes. There is a beautiful one to the side of Kamakura’s Hachimangu whose approach seems little more than a narrow forest path, leading to a flight of weathered stairs and, for me at least, a haunting sensation of being watched.

What all this fox related jabbering is leading to is the noodle recipe that follows.

Now there’s a leap of logic for you.

To explain: not long ago I attempted to make some Kitsune Udon for my partner and Ghorb, who is currently living with us. A rough translation would be Fox Noodles. I’ve never understood what appeal fried tofu has to foxes, but then I’ve never really felt much of an urge to delve into it either. Just sort of took it as given that the folkloric tricksters of Japan’s unforgiving ecosphere would , like me, be really into soy products. 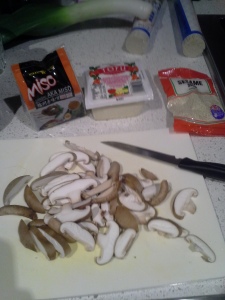 First, I chopped up a whole bunch of Shitake Mushrooms for broth. Because mushrooms are great.

Arrayed behind said mushrooms are my other ingredients; red miso paste, sesame seeds and firm tofu. You’ll be able to tell from these that I’m not making a traditional broth… this is really more an homage to a memory than a real recreation.

Because I’ve tried to arrange for silken tofu to hold its shape through the frying process before, and we all remember how that went.

Well, you guys don’t I suppose… it didn’t end well. Silken tofu just kind of disintegrates when you try to fry it, and this little blogger had to walk all the way back to the supermarket, which is… admittedly, right across the road, to get firm tofu.

Here’s what you do with it.

You slice it into little steaks. I made triangles, but you could equally make rectangles or any other shape your knife skill

Give them a quick skin mixed from flour, salt, pepper, and garlic powder.

Fry in oil until crispy.

Fry the mushrooms, then drown them in hot water and add a goodly dollop of miso paste to make a tasty broth. Sprinkle in some finely chopped spring onions, and your golden. Throw in noodles for your audience and… hey presto.

Get those noodles and that broth into a bowl, place the nice little tofu guys on top, and sprinkle with sesame seeds.

Much more attractive than most of the foxes I’ve encountered, to be sure. 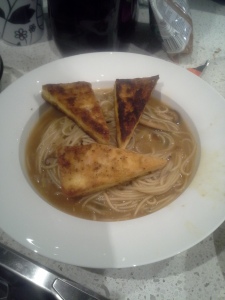